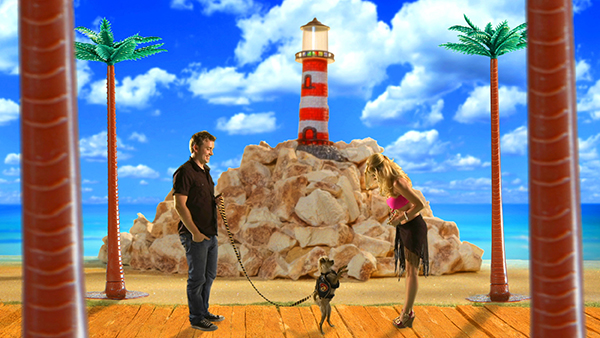 A young man hires a dating service that employs a cute dog named Adonis as a chick magnet. Although he attracts beautiful women at every turn, Adonis must reach deep into his bag of tricks to find the right match. Won Best Short Film at the 2013 Riverside International Film Festival among other awards.

Adonis was born way back in the year 2001. My friend, Jamie Jansen, and I were extras in the movie Planet of the Apes and suffering through a tortuous month-long shoot in the Mojave Desert. It was around Valentine’s Day so we started sharing our rejection stories to ease our pain. Our conclusion was that the key to getting a girl was to get a cute dog. That idea quickly turned into the basis of Adonis.

A dating service that uses a dog to lure women is a bit over-the-top. To make this scenario believable, I wanted the world of Adonis to be cartoony and exploding with color. Perhaps because I love model railroads, my thought was to have the world be built out of real miniatures that would be photographed and moved as if the characters were in a live-action cartoon or pop-up book. Then to top off the visuals, the music would soar with kazoos and marching band drums.

Despite this assault on the senses, the core of the story is about rejection and the search for love, something which certainly everyone can relate. Actors James Snyder, Velinda Godfrey, Ernie Hudson and the ridiculously talented canine star Jimmy bring the realism and heartfelt honesty to this romantic comedy.

The candy-coated Adonis took many years of delay, false starts and then more years of greenscreen compositing and special effects. Despite this, it is a story that I kept coming back to and felt I had to tell. It is a movie that has slowly but surely come to Technicolor life thanks to everyone involved. 61 dog years later, I am proud to unleash Adonis.

Canadian premiere
« À la Française
Aeternitas »
Go to Top
This website uses cookies to remember users and understand ways to enhance their experience.
Some cookies are essential, others help us improve your experience by providing insights into how the site is used.
Cookie settingsACCEPT ALL REJECT
Manage consent