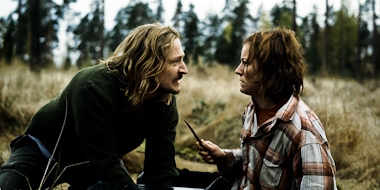 A space explorer crash lands on earth. Injured and highly distrustful, she needs to send an emergency signal but can’t do it alone.  Place to Stay is a sci-fi drama about distrust between two strangers in the Finish countryside. www.placetostaymovie.com

In moments of crisis most find it hard to trust people they don’t know. People struck with fear of death cry for their mothers, and those with heart aches find comfort in their best friends. How would it feel to have to trust a complete stranger after crash landing on an unfamiliar planet?

The challenge of turning something far-fetched into believable is fascinating. The setup of this story is not even impossible, only extremely unlikely. Two humankinds finding each other became much more real when explored as a clash between two individuals: what if this happened already in some quiet rural area? I believe many will also recognise themselves in the shocked explorer, to whom the unknown appears more a threat than help.

Place to Stay is a story about fear and new beginnings – maybe even a reminder of how isolated we are on this planet. I wanted to show the events like a moment of distrust between any two people, who know they could gain or lose everything. Chances are those situations can’t be avoided even on other planets.

A woman crash landing from outer space to a Finnish land owner’s forest can appear to have little in common with most of us. Yet we have all been far from home, trying to understand an unfamiliar environment. On a closer look, we’re not that different, and presenting this story from an outsider’s point of view makes it stand out.

Of course numerous aliens have visited earth during the history of cinema. Surprisingly, many have landed right next to one of the larger American cities. Even more often the events are presented as a global threat that affect everyone’s lives on Earth. This is another reason why Place to Stay has a fresh approach to the genre.

The uncommon location and small set of characters create an intriguing starting point, but what is truly fascinating are the woman’s decisions. These situations, where a human being needs to trust a complete stranger, happen all the time in the countryside, in the cities, both in Finland and other corners of the world (or the universe). Place to Stay explores this difficulty of trusting another and therefore has the power to reach out to every viewer on this planet.

« Over the Fence (Viiko ennen vappua)
Plea »
Go to Top
This website uses cookies to remember users and understand ways to enhance their experience.
Some cookies are essential, others help us improve your experience by providing insights into how the site is used.
Cookie settingsACCEPT ALL REJECT
Manage consent