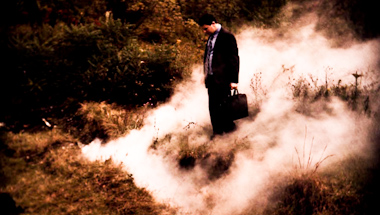 A salesman approaches a mysterious landowner with an offer to buy the man’s smoldering abandoned coal mine but finds that there is something far worse than a mine fire underneath the land.  Won Best Short Film at the 2009 NYC Horror Film Festival. www.sinkholemovie.com

Sinkhole is ostensibly a horror film, but I believe the best horror films habor pertinent and consequential themes, as opposed to glorifying violence or merely inflicting terror for its own sake.  Sinkhole is a cautionary tale whose underlying message is to be mindful of the destructive forces that can be unleashed in the blind pursuit of greed, for more often than not such forces are recognized too late.  This is the lesson that Schuttmann, who has seen firsthand the devastation such forces can inflict, attempts to impart to the heedless, arrogant broker who is our film’s protagonist.  It is a subject that is especially relevant today given both the current global financial situation and the worsening of our environment.