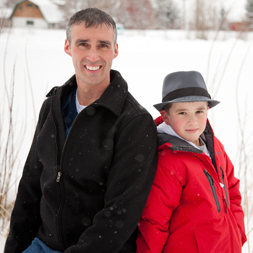 The Last Laugh is Dion Burryâ€™s first short film submitted and accepted to the Reel Shorts Film Festival. He has worked on a number of others over the last year, and has enlisted the help of his eight-year-old son Joseph for all of his films so far. Joseph has co-starred in the majority of the films and has helped with the camera work.

It has been a tremendous learning experience and Dion knows that there is still so much more he can build upon. Dion completed an Acting Course at Grande Prairie Regional College and hopes to continue learning about every aspect of filmmaking.Â  Based on what he has learned so far, he has great expectations for his future projects and hopes that his son Joseph will keep his interest in it also.

Heâ€™d like to thank Rio Fitch for his technical support and his son Joseph for being such a great sport.