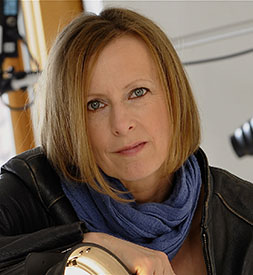 Eva Colmers is an independent filmmaker in Edmonton who has written, directed and produced a dozen award-winning short films including The Weightless Traveller, Hand Sum, Blink! and No Problem. For the NFB she has written and directed The Enemy Within based on her Fatherâ€™s experience as a POW in Canada; and more recently, The Elder Project, an episodic story collection about seven different elderly people.

Evaâ€™s short films have been seen at countless festivals all around the globe and received awards for social commentary and creative style. With a background in theatre, Eva has also created media installations and visual backgrounds for theatre, dance, and music performances.

Eva first read about so-called â€œgranny dumpingâ€ in a newspaper article of the National Post and felt compelled to explore the topic in an artistically creative way. Directing the NFB documentary THE ELDER PROJECT had already made her aware of the complexity of the issue and some of the challenges faced by both the frail elderly and the burned-out caregivers. Her decision was to write a fictional story grounded in reality and to juxtapose the end of life against the beginning of life. Granny Baby screens in the I See You film package. She will participate in a Q&A afterwards.