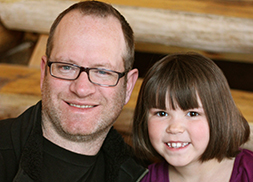 Rioâ€™s fifth short film, Found a Peanut, is based on the old camp song of the same name. If you have heard the tune, you may have wondered why someone would have eaten the rotten legume. This comedic adaptation of the song’s narrative answers that question.

Rio has spent quite a lot of time learning and refining this craft, and experimenting with a wide variety of subjects, but currently focuses mostly on short comedies for and about children.

The Trap is Rioâ€™s sixth short film and stars his eight-year-old daughter Billie who was seven at the time the film was made. This is the fourth year in a row that Rio has had a film in the festival. It screens in the Flights of Imagination film package. Rio and Billie will participate in a Q&A after the screening. It also screens in the North Peace Encore package after which Rio will participate in a Q&A.