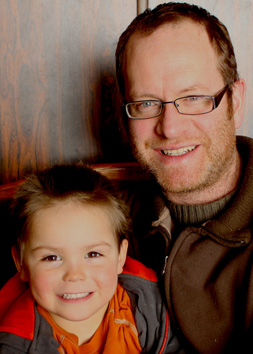 The Driving Accident is Rio Fitchâ€™s third short film. Â It has a fairly simple plot, and the story is largely driven by the personality of the lone actor in the film, his four-year-old son Skyler. His previous short films have focused largely, or entirely, on elements from the natural world. Â However, inÂ The Driving Accident a single human character interacts with an entirely manmade environment.

Despite having no formal training in filmmaking, Rioâ€™s first two films (Daydream andÂ A Day of Hunting and Gathering) screened at the Reel Shorts Film Festival last year as well as at the 2010 Haida Gwaii Film Festival in BC.Â  A resident of Rolla, BC, Rio has spent quite a lot of time learning and refining this craft, and experimenting with a wide variety of subjects.Â  He has found some of the most amazing visual spectacles right in his own backyard and, quite literally, right under his feet.

The Driving Accident has its Alberta premiere at this yearâ€™s festival.Â  Rio and Skyler will participate in Q&A sessions after Gruff & Stuff (9:30 am, Friday) and Family Shorts (11:00 am, Saturday).