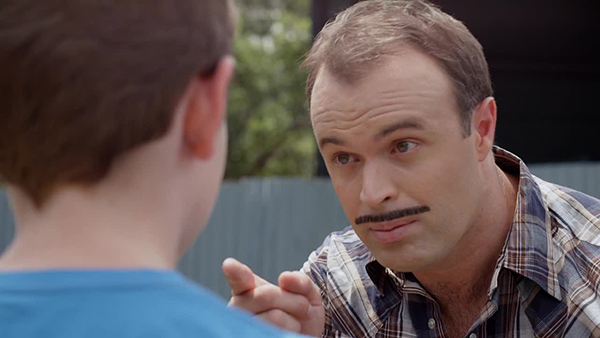 In a world where time travel is a simple hospital procedure, a man travels back in time to convince his 10-year-old self to learn the guitar so that he can get more action with the ladies in the present day, but his younger self is less than willing to cooperate and things quickly spin out of control. It’s one giant leap backwards for mankind …
Facebook page

I am generally a very well behaved, polite person. Mrs Testro raised her boy right. When I first read Larry’s script, I loved how absurdly funny it was, I loved that it was a time travel story (a genre of which I am a huge fan), but I also loved that it was a little badly behaved. It was a tone of script I would probably not write on my own, and I was excited at the prospect of making a film that would push things a little – a film that would not be afraid of walking up to the line and then sticking its toe over it a little to see how Mum and Dad would react.

As Larry and I redeveloped the script together, one of the major challenges was finding the right tone. We buffed out some of its rougher, more gratuitous edges while simultaneously investigating other areas where we could push the taste envelope even further, provided it was in service of the story. And, of course, funny.

Tone remained the major challenge when shooting the film. The story in itself was so absurd that if we played it as a joke, I thought the whole thing might just float away rather than connecting with an audience. So it was important we kept the film grounded as much as possible, no matter how crazy the events being captured on camera. The actors would play their parts straight. The time travel technology would be kept very low-key and contemporary, rather than portrayed as a mad science laboratory. And the film would be shot in some respects like a drama – higher contrast images, slightly looser camera handling, and not afraid to use more close-ups than I might in another comedy.

We shot the film over two weekends and post-produced it very quickly, over less than a month – a considerable challenge considering the visual effects work involved.

I am very proud of the result, and very glad to have made it working with a group of close friends.

« I Don’t Care
Icarus (Icare) »
Go to Top
This website uses cookies to remember users and understand ways to enhance their experience.
Some cookies are essential, others help us improve your experience by providing insights into how the site is used.
Cookie settingsACCEPT ALL REJECT
Manage consent