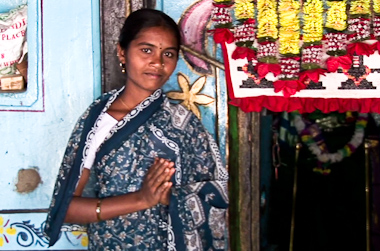 Filmmakers in Attendance: Karl Mattson and Andrew Lodge.  Sisters of Karnataka is a documentary about the unconventional spread of HIV/AIDS through the southern Indian countryside where poverty and tradition drive young women into the sex trade. Relegated to the lowest caste of society, they are highly susceptible to infection by HIV and other sexually transmitted diseases, and have little access to health care. A unique solution was proposed by one man, Shiva Halli, born in rural Karnataka and now a professor in Canada, to develop clinics that employed sex workers to teach their peers about sexual and mental health. Glimpses of empowerment and dignity have followed since the inception of Halli’s brainchild, now known as the Corridors Project.

In Karnataka province in southern India, on the frontlines of the struggle against HIV/AIDS, an extraordinary group of women are organizing and launching a response to the virus that directly threatens their existence. The women are sex workers, marginalized by the mainstream, and they have a unique and fascinating, if tragic, story. Many come from a particular group, known as Devadasi, a traditional categorization where young women are donated by their families and placed in the role of temple courtesan, or, as some have called it, temple sex slave. Many others enter the sex trade due to extreme poverty and arranged child marriages that either failed or left destitute young widows. In partnership with sex worker collectives, a peer counseling project, called Corridors, is ensuring access to HIV-related education, condom provision, and high quality clinical services for more than 13,000 sex workers in Karnataka province.

Our inconspicuous two-man crew ended up being an asset in obtaining access to the inner workings of brothel life. Our friend and guide, former Karnataka native Shiva Halli, who helped create the Corridors project, proved invaluable as the sex workers look to him not only as a professor, but as a much revered friend. The production experience in India was intense. During a shoot in one brothel, we had to remove ourselves from the reality of what goes on in those rooms and why the soles of our feet had become slimy. Yet the women, their sex rooms absent of any comfort – even a blanket – offered us what little creature comforts they had and would sit and openly discuss their life with us – sometimes allowing laughter and smiles, other times trying not to let the tears glistening in their eyes well over.

We will never forget the kindness of the poor and the chaotic blending of old and new underlined with an ancient sense of peace. Our intimate filming of the Sisters of Karnataka was a harsh education that altered even how we view our everyday life after returning home. We hope that this video can be an education for all viewers and that in some small way it will help those we interviewed and all in their situation.

Alberta Premiere
« Sinkhole
Skin »
Go to Top
This website uses cookies to remember users and understand ways to enhance their experience.
Some cookies are essential, others help us improve your experience by providing insights into how the site is used.
Cookie settingsACCEPT ALL REJECT
Manage consent