Calling all Peace Region filmmakers and anyone else who’d like to register a team for an adrenaline-filled weekend of filmmaking in the Peace Region! PRIMAA and the fest have joined forces to put on the second annual Frantic48, a 48-hour film challenge the weekend of April 24-26, 2015 (early bird registration deadline April 1; final registration deadline 6:00 pm, Tues, April 21st). A selection of completed films (as many as possible) will screen during the fest on Fri, May 8 and a juried award for Best Film will be presented as well as an Audience Choice Award.

If you think the Frantic 48 sounds fun (in a crazy sort of way) and you’d love to participate but don’t have enough willingly insomniac friends to put together your own team, email Monty at littlenotepads@yahoo.ca and he’ll do his best to find a team for you to join. And remember, you don’t have to be in Grande Prairie to participate, or even live in the Peace Region – only the 48 hours of the Frantic 48 has to be spent in the Peace Region as you make a short film of 2-7 minutes using an assigned prop and line of dialogue (the same for all teams) and an assigned genre (unique to each team). Good luck! 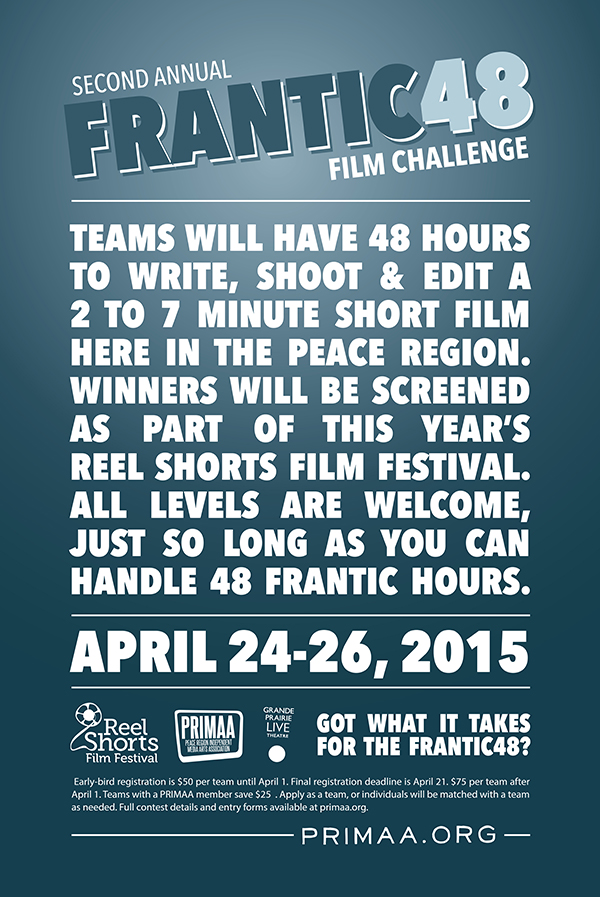