Next up in the GPLT Movie Series, the winter series of feature films affiliated with the Reel Shorts Film Festival, is The Whistleblower, a 14A-rated political thriller starring Rachel Weisz as Kathy Bolkovac.Â  Based on the true story of Bolkovac’s experiences as a peacekeeper in post-war Bosnia, she discovers that her United Nations colleagues are complicit in a sex slavery ring.Â  Her quest to stop the trafficking and bring the perpetrators to justice becomes mired in a world of corruption, cover-up and intrigue.

When I saw this film in Edmonton on September 26, the big question in my mind was “How much of this story is true?”Â  In Truth Be Told: The Whistleblower, a news story by Jennifer Ceaser on the Tribeca Film Festival website, Bolkovac says, “They stayed true to my life while I was in Bosnia for the most part” although Raya, the Ukrainian girl in the film, is actually a composite of several girls.Â  Bolkovac was involved with the development of the script so that she could offer corrections in terms of how things were said or done from a police background.Â  However, she adds, “In real life, I didn’t develop those strong attachments to the girls; it’s something that as a police officer you can never do.Â  That may be the one issue I take with the film, but they had to allow that to happen for the sake of getting the emotion of the story across.”

The Production Notes on the film’s website describe how Larysa Kondracki, the Canadian Director and Co-Writer of this Canadian/German co-production, contacted Bolkovac about turning her story into a feature film, and how Rachel Weisz got involved in the project.Â  The film also stars Academy Award winner Vanessa Redgrave, Monica Bellucci and Academy Award nominee David Strathairn.

Screening time is 7:00 pm, Sunday, January 8th.Â  More information about location (Second Street Theatre) and tickets ($10; $5 for students; available in advance or at the door) can be found on the GPLT website.

This is a powerful film and well worth watching. 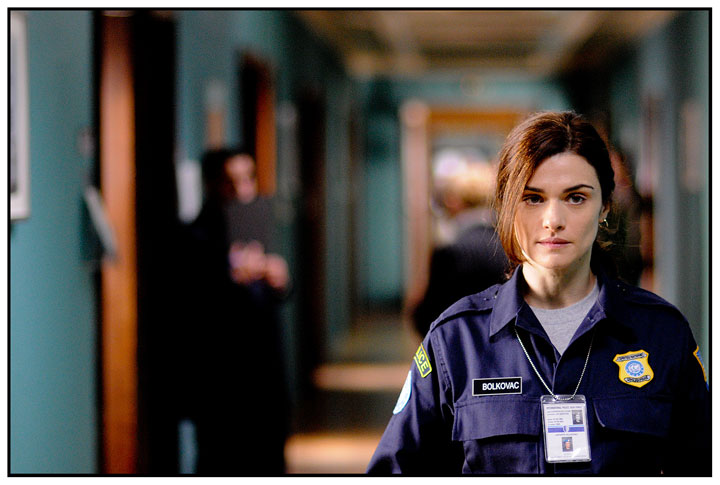