Tuesday – the last day of shooting. We start at noon because we’ll be staying late to get the night shots. Cyril Cook (Soldier) stands in the long grass ready to approach the bus in the first scene of the day. 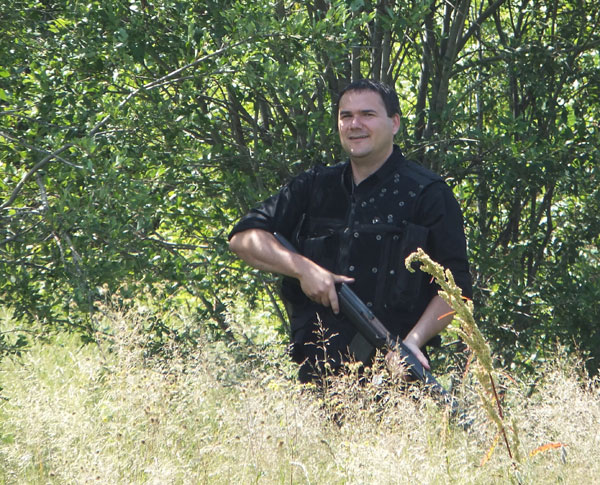 Director Scott Belyea talks to the Soldiers about the next shot. 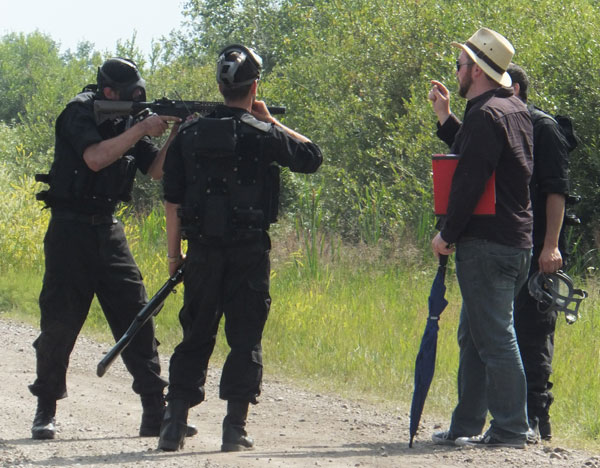 By late afternoon, the sun disappears behind storm clouds that are rolling in. We hope we can finish with this location before it rains. The Hazmats (Clint Webb and Marc Arsenault) wait for their cue to approach the bus. 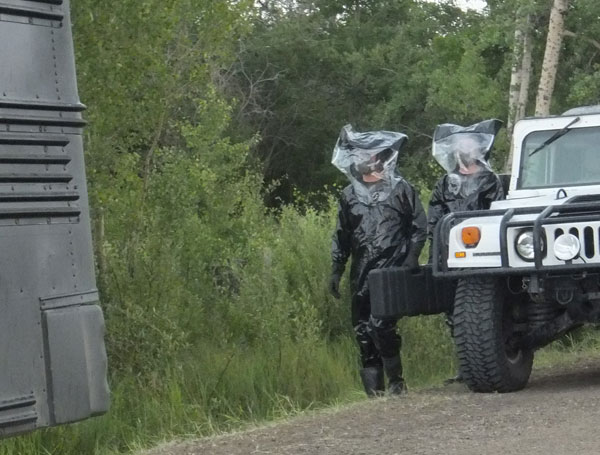 Unfortunately, the rain and lightning arrive before we can finish. On the plus side, the storm blows through quickly and coincides with our planned dinner break. 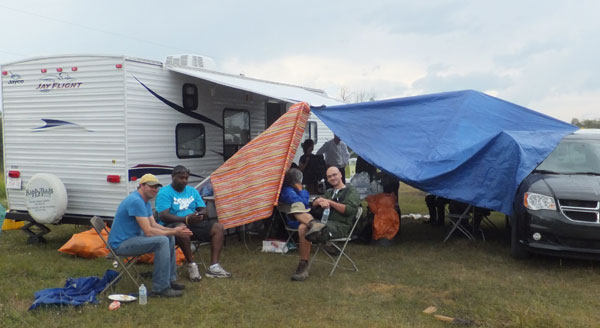 Danica Gunnarson (Hummer driver) and Kiki take a water break once we’re back on set. With the extra shooting day and hot temperatures, water was definitely one of the items that we went over budget on. Food was another. A big thanks to Keddie's Tack & Western Wear for being a food sponsor! 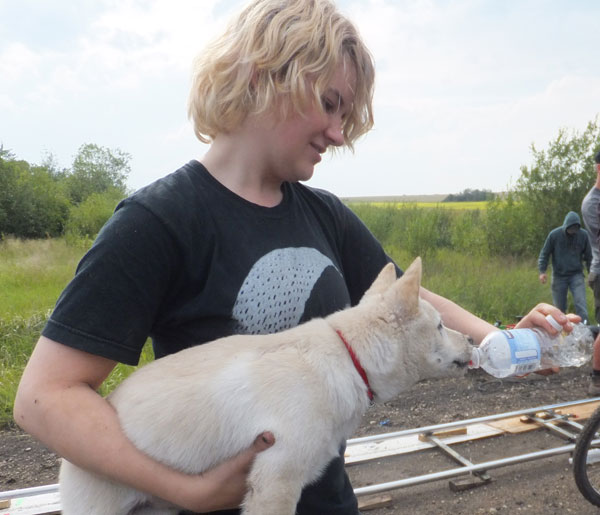 Our dusty gravel road is still wet from the rain as Patrick Gerber (Soldier), Lloyd Piehl (Sergeant) and Jordy Wiens (Doctor) listen to instructions before the camera rolls. 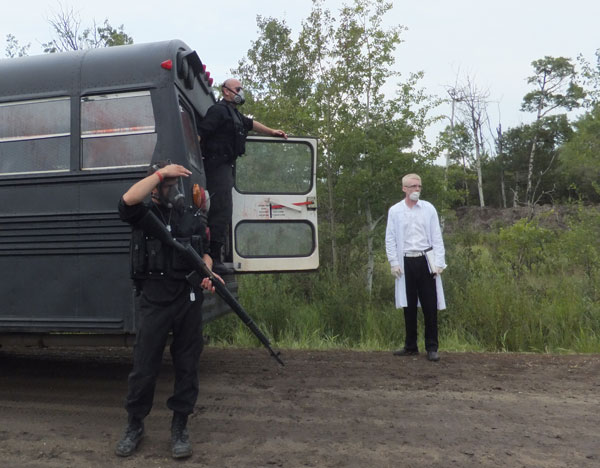 The skies clear and we’re greeted with a rainbow as we move to the entrance to our last location where the bus will “burn”. 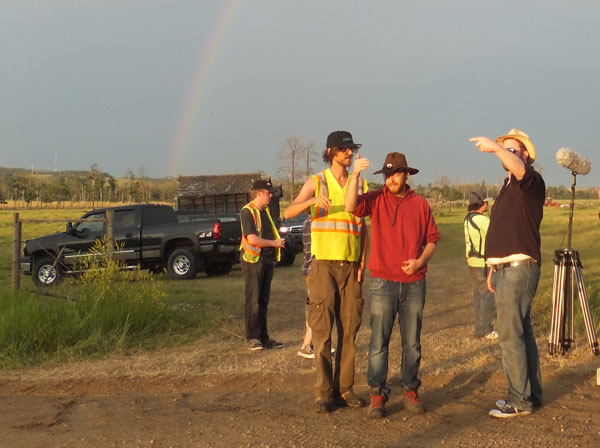 Scott’s parents, Marilyn and Brian Belyea, watch him setting up the next shot. These past six days have given them a chance to see him do what he loves to do since it’s the first film he’s made back home in Grande Prairie rather than in Vancouver. But they didn’t just stand by watching. Marilyn baked a lot of goodies to help feed cast and crew, and Brian helped out with transporting a passenger van. With Scott’s sister Carolyn working tirelessly to provide refreshments, water, and snacks as the person in charge of Craft Services, his whole family was involved in helping to make it a great experience for everyone. 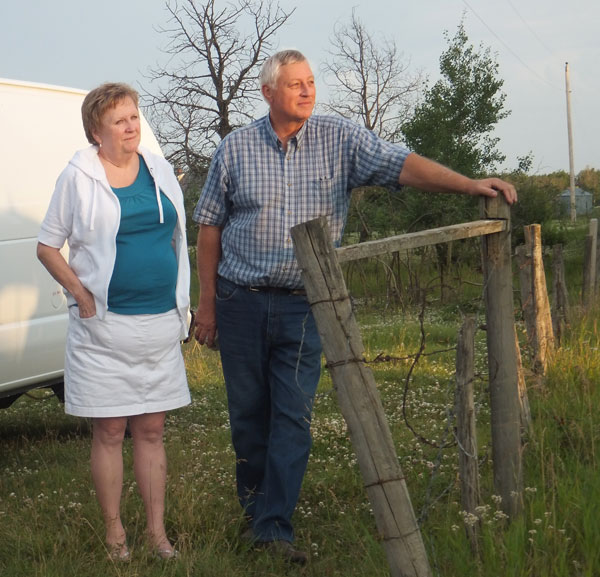 DOP Scooter Corkle shows off his safety harness as he prepares for a moving shot of the bus as it’s driven to its final destination. 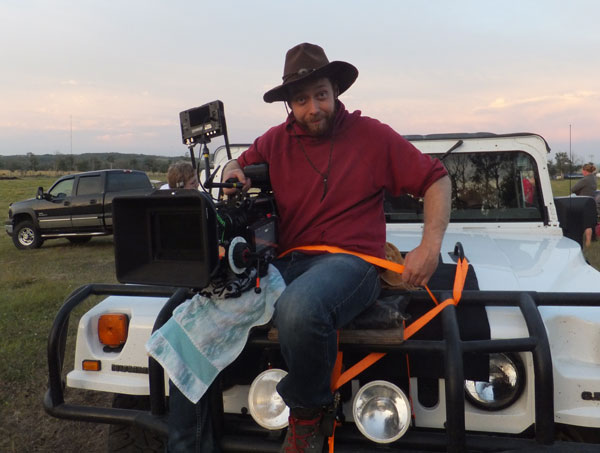 Once the bus is in position, lights, filters, and a smoke machine are set up. 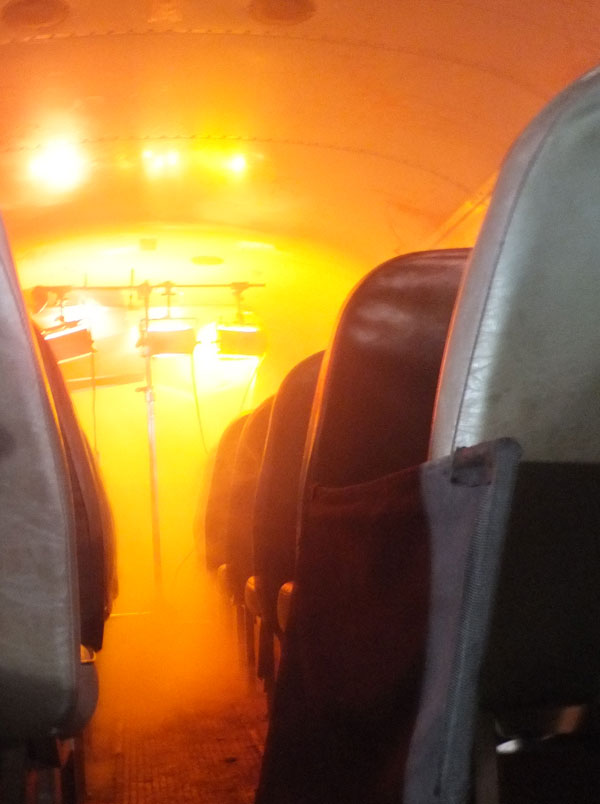 As the bus “smolders”, the camera crew is ready for the flamethrower to add real flames to the illusion. 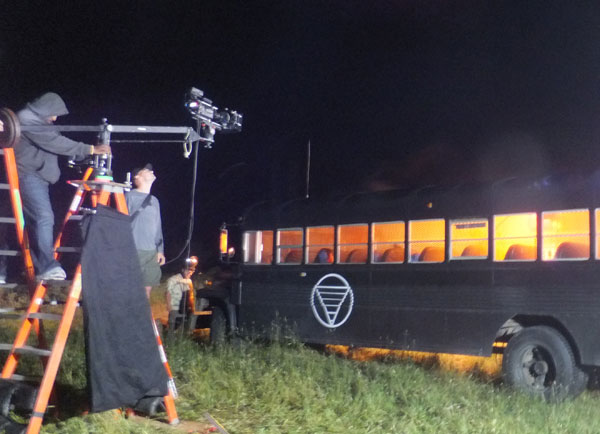 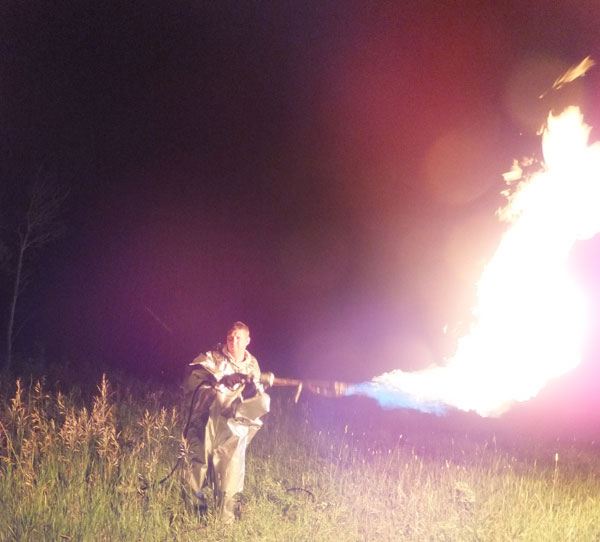 Finally, at 3 am, Scott yells, “That’s a wrap, everyone” as the festival’s first produced film completes production. CGI will be added in post-production when Scott gets back to Vancouver. In the meantime, the interns will have two days starting tomorrow to learn editing by playing with the footage in the Mac lab at GPRC (Grande Prairie Regional College) which so kindly collaborated with us on this project.

By 4:30 in the morning, all the gear has been packed up and we’re back in Grande Prairie for a small wrap party. The big wrap party will be at Mr. Mikes on Friday, but all the Vancouver guys head back today except for Scott and we couldn’t let them go without a beer, lots of hugs, and vows that we’ll do this again. At 5:30 it’s already a sunny morning as we all head off to get a few hours of sleep.