Sunday was overcast with rain showers moving through the area – not good for the aerial shots from the helicopter that Scott and Scooter want to get today. While Scooter and Ryan take the 5-ton Whites truck to the farm where the helicopter is stored so they can get the camera set up, Scott phones to suggest we meet for coffee.

We hadn’t talked much on the phone the night before. All he’d really said was “Get some sleep” which is clearly what I most needed. A simple remedy except that I was too stressed out to sleep. Everything concerning the bus had me worried sick because it was in my name, I had insured it, and I was responsible for what happened with it. I was also responsible for the welfare of all the actors and crew except for the guys from Vancouver (Scott, Dave, Scooter, Ryan, Blair, and Matt) and Josh Hudon from Edmonton who would bring a flame thrower on Tuesday for the big night scene – the burning of the bus. Yeah, the bus again, the “burning” of which would happen on my girlfriend’s property while she and her husband were away. I figured she’d be upset with me if she came home to find her place burned down. But the big thing that had tipped me over the edge was what we were putting people through to shoot this film and how many of them – about a dozen – were under 18. When Scott and I had our coffees, his Executive Producer (that would be me) was an emotional mess.

Ideally, the producer is the one who should be supporting the director through the intense emotional turmoil that is production, not the other way around. I felt guilty about that too. But all I could focus on was that there was a line in the script that I really didn’t like, and that scene had been shot yesterday with the line still in it, and now the film would be ruined, and we were half-killing people for nothing. You can imagine Scott’s reaction when faced with this kind of logic, but the words I remember most are: “Nobody wants to make a movie when they’re making a movie – it’s f**king hard!” And with those bracing words of wisdom, I took a deep breath, wiped my eyes, and went with Scott to see if the helicopter was ready.

When we arrive, the camera is secure and ready for take-off. Ryan will also have a firm grip on it while in the air. 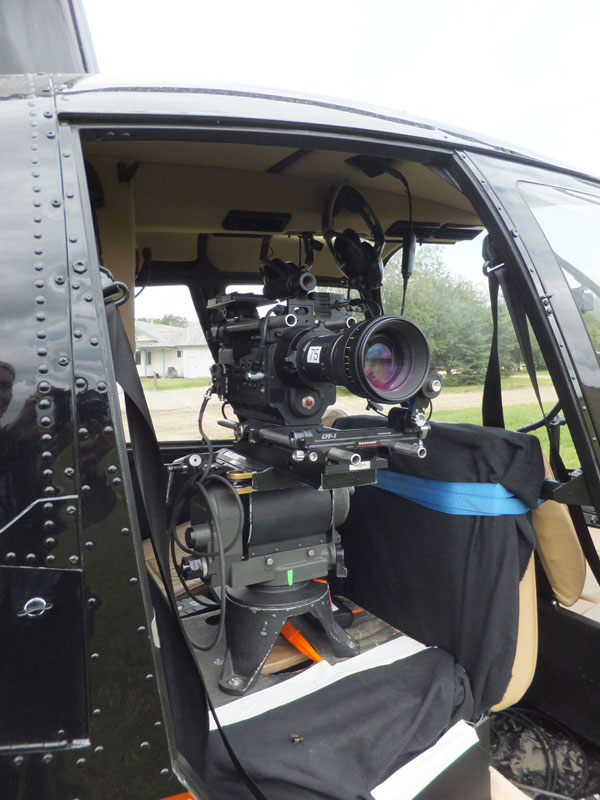 The plan is that Billy McClelland, the pilot, will take Scooter and Ryan up first for a test-run and to fill up with fuel at the airport. When they return, Scott will take Scooter’s place. Except for wanting a longer helicopter ride, Scooter is excited about the plan. 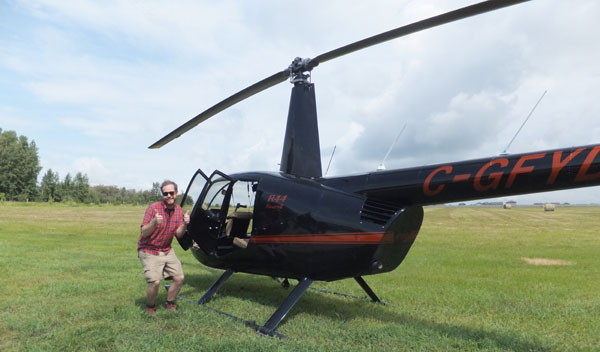 Scott has mixed feelings about the plan. Although he’s really excited about getting the aerial shots and about directing a helicopter pilot and the bus below, he’s also feeling sick to his stomach because he’s afraid of heights. We watch as take-off goes smoothly with the pilot, Scooter, Ryan, and the camera taking all four seats. 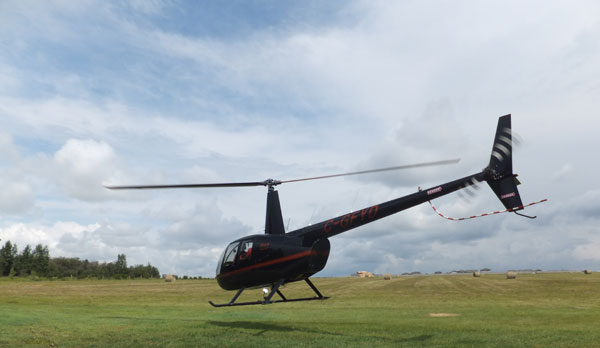 Producer Dave Rice finds a cat to play with while we wait. 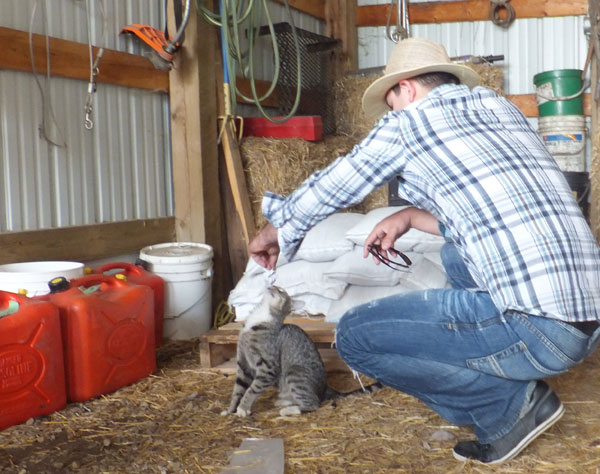 Then Dave discovers that the cat has kittens and brings one to show Scott. Intern Cam Belseth came out to take photos as well. 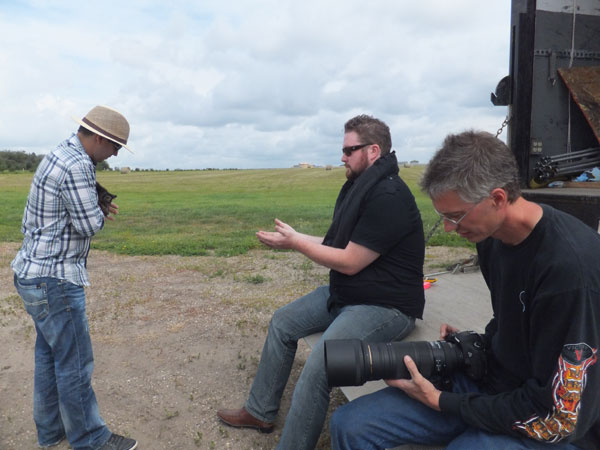 Who could resist such a face? 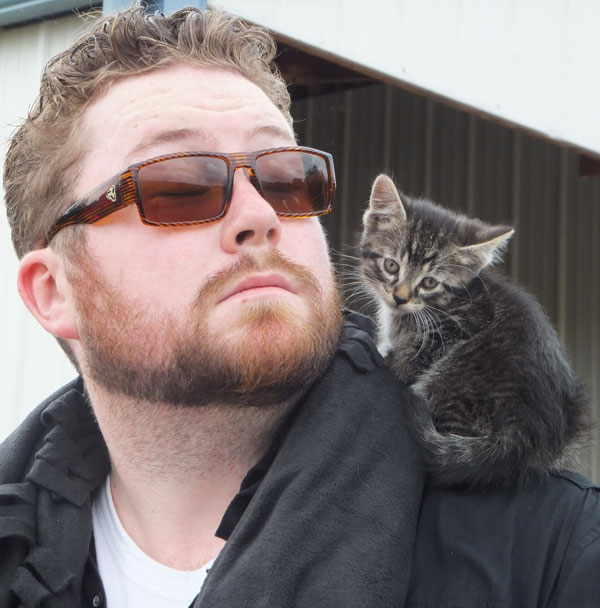 Mark Shpur arrives with the bus. He has so many roles in this production that it’s hard to remember them all: intern, actor, bus driver (but not the actor playing the bus driver – that’s Travis Fowler), and propmaker. He’s also the guy who keeps the technical side of things running smoothly for the fest. I can’t imagine taking on one of these major projects without having him to rely on. 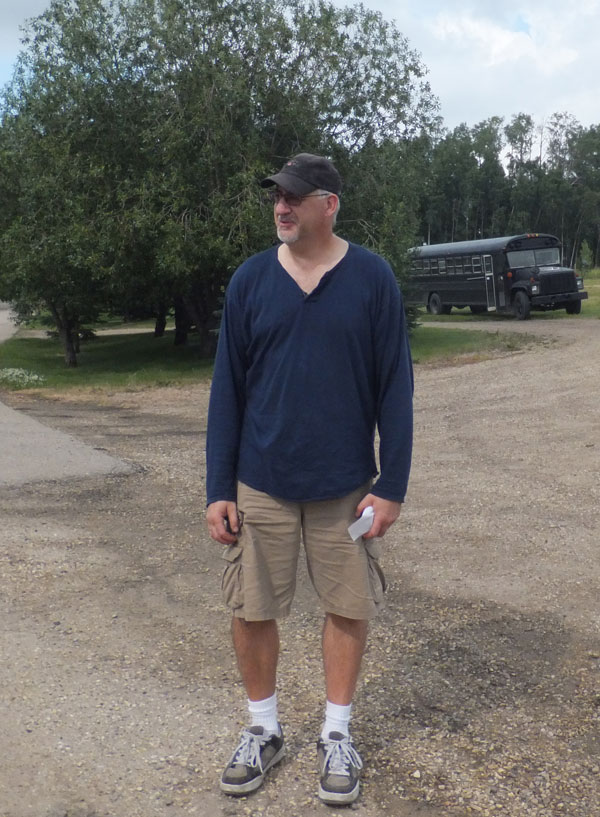 When the helicopter returns, the kitten gets a chance to check it out while visiting with Ryan. 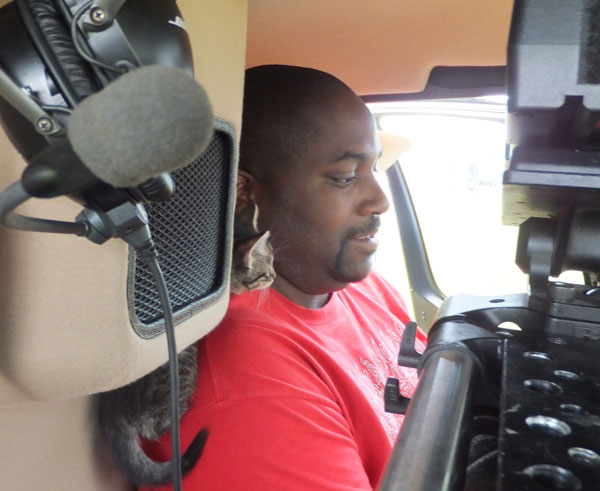 Scooter gets his turn with the kitten. 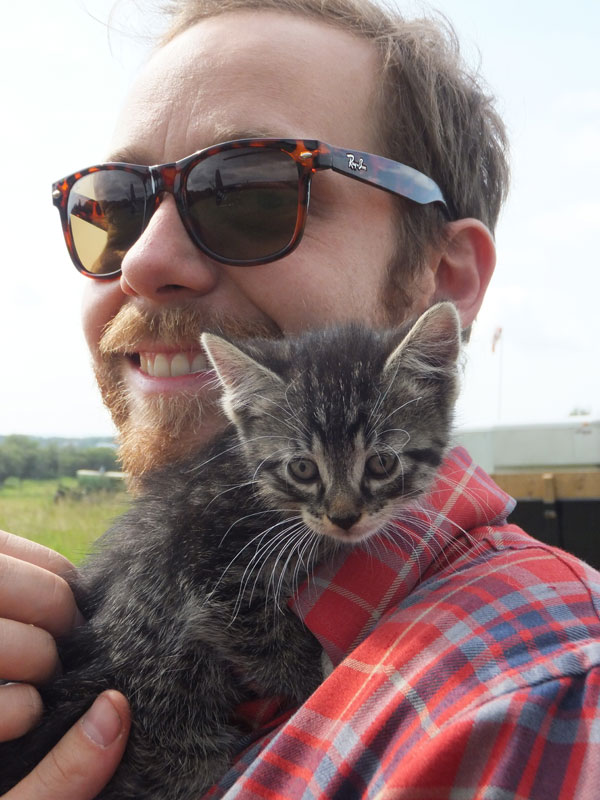 Scott models his wussy blanket. At least, that’s what he calls it. He says it’s so he can cover up his head if he gets really scared on the helicopter ride. He’ll have his head under it for sure, but only to block any glare while he watches the monitor. 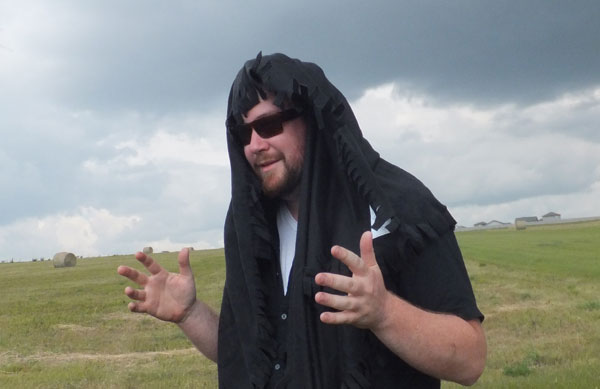 Knowing about Scott’s fear of heights and wanting to comfort him as only a good buddy can, Dave tells him, “I promise we’ll finish the film for you if anything happens and you don’t make it back.” 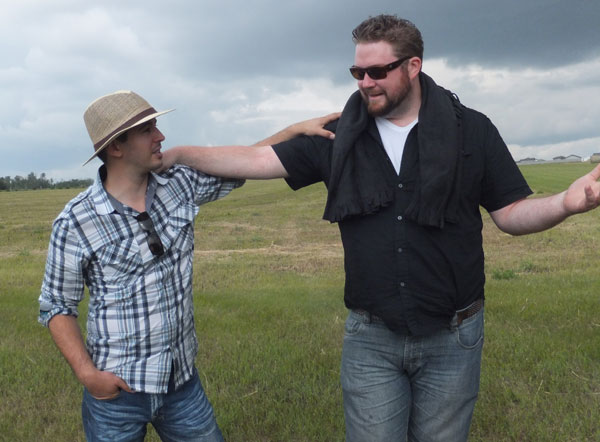 The last wave goodbye before climbing aboard. 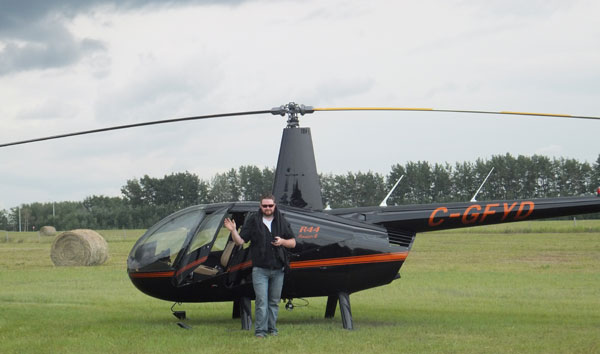 With the clouds worsening, the helicopter takes off to head for a sunny patch that Mark can drive to. I wonder how Scott’s nerves are doing while they go up … 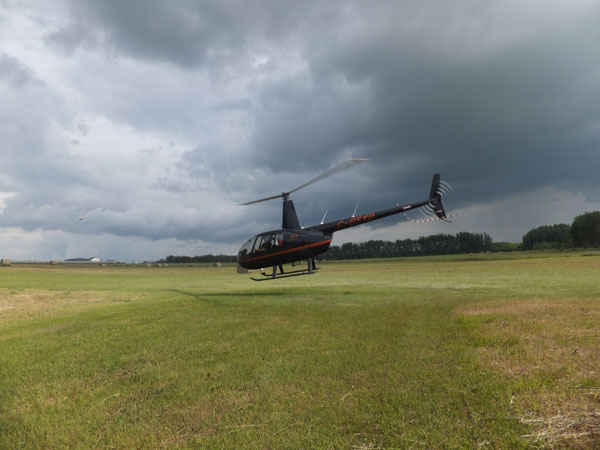 a little bit up … 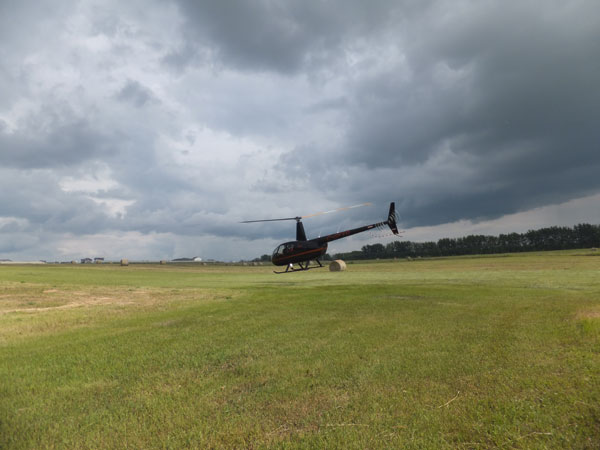 a smidgen more up … 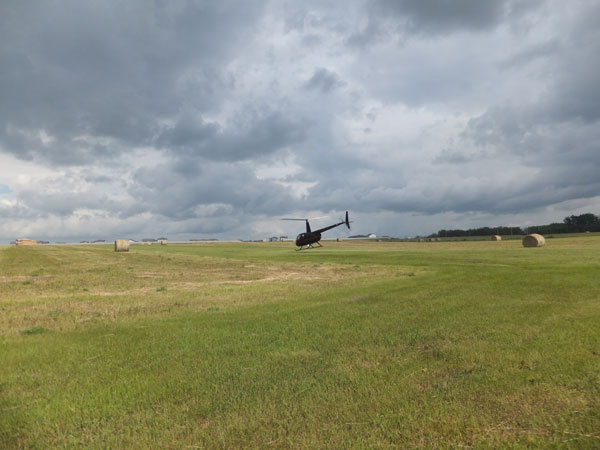 still not up very much … 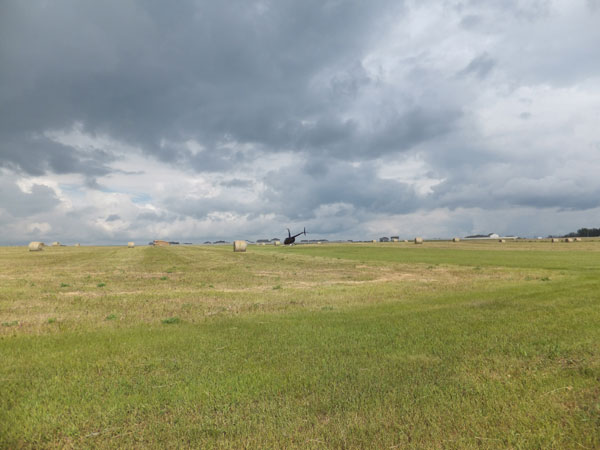 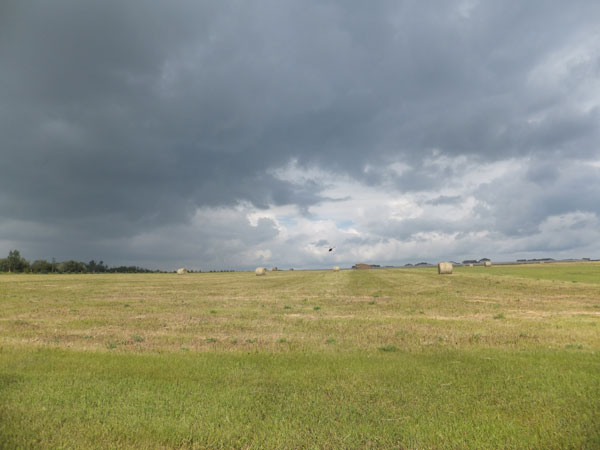