Chris Beauchamp here. I’ve been working with Fest Director Terry Scerbak for the past few years on the festival branding and graphic design. Through that collaboration, I also became aware of, and applied to become one of, the ten interns involved in the Horizon Project shoot this past summer. It was easily one of the best decisions I’ve made, although at the time I had no idea the filmmaking bug would bite my butt so hard!

Since then, I’ve also worked on another short film, directed by Rory Mells, and filmed here in Grande Prairie. That film, called Sophia, will be premiering at this year’s fest, as will the Horizon Project. 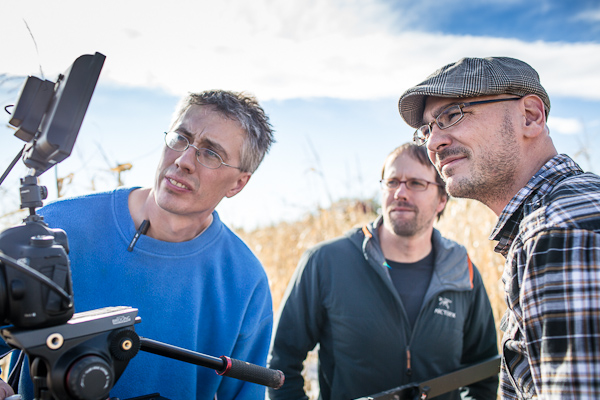 It has been one heckuva year for Grande Prairie filmmaking, and things are continuing to explode in new and interesting directions. To that end, one of the next projects to be produced and filmed right here in GP will be my own first short film. Tentatively titled the Device, the film will be produced shortly after the fest, filmed on location at the GP Wapiti Nordic Ski Trails May 17-20. The principal crew behind Sophia will be collaborating once again and we need to cast one more important role for the film.

Terry has generously allowed me to post the casting call here. Full details below. Thanks for looking, and I look forward to seeing you all at this year’s Reel Shorts Film Fest May 1-5.

The Device (working title)
A cabin in a dystopian wasteland. A suspenseful showdown between two strangers. Each believes he knows what the other is after. Both are wrong.

The Device will be filmed as a taut character study, with a realist aesthetic and high production values.

BUDGET & DISTRIBUTION
To-date, this is a self-funded project, and as such all roles and crew positions are voluntary. Catering will be provided during shoot days. The finished film will be submitted to various festivals.

CASTING OPPORTUNITY
One of the two characters has been cast. The other character is open to male actors, 30 years of age or older:

The Neat Man
The Neat Man is a loner and a hermit. He believes himself smarter than other people. He treasures any and all fragments of the former civilization. He fancies himself an amateur archaeologist, a poet, a philosopher, but more realistically he is a hoarder. He trades in goods and does very well for himself, but he would never trade away the really valuable artifacts. He is untrusting, shrewd, selfish, and ultimately, weak. He believes everyone thinks like he does. He thinks he wants to be left alone, but what he really wants is for others to know how superior he is.

THE AUDITION PROCESS
Interested actors are required to contact writer/director Chris Beauchamp to schedule a 15-minute audition slot. Interested actors will be provided with 2-pages from the full script in advance, and are encouraged to prepare and/or ask questions. The script will be in-hand during the audition.

The audition will include a short camera test. Film acting experience is preferred, but not mandatory. However, comfort around the camera and a positive attitude is a must. The shoot schedule will involve 12-hour days, as well as a few directed rehearsal sessions. The successful candidate will need to commit to the full shoot schedule: May 17-20.

Auditions will take place Monday, March 25, at the Second Street Theatre, to be scheduled between 5:30 and 8:30pm.

Please email me directly to arrange a time slot and script sides. Auditions will be scheduled on a first-come basis.

Emotion on Film: The Director/Actor Collaboration
July 17, 2013
Go to Top
This website uses cookies to remember users and understand ways to enhance their experience.
Some cookies are essential, others help us improve your experience by providing insights into how the site is used.
Cookie settingsACCEPT ALL REJECT
Manage consent