Our Filmmakers at the Worldwide Short Film Festival

Every June I go to Toronto for the Worldwide Short Film Festival to pick films for next year’s fest, but this year’s trip was extra special because Scott Belyea and Scooter Corkle were there with their film Children of the Dark which screened in the The Night Shift program Saturday at 11:30 pm. It was great to meet the producer, Dave Rice, as well as their filmmaking buddies Daniel Domachowski and Matt O’Mahoney, producer and director respectively of Adjust Tracking which screened later in The Night Shift. Scooter was Cinematographer and Scott acted in it and edited it. As many of our festival attendees know, Scott and Scooter lead the Youth Filmmaking Challenge workshops every year. The films are great and can be watched on our website. Scott, Scooter, and Dave will also be here for Shoot for Reel next month. As can be seen, they took great pains to dress appropriately for this 5-hour late-night marathon of horror films (from left: Scott, Matt, Dave, Scooter, and Daniel). 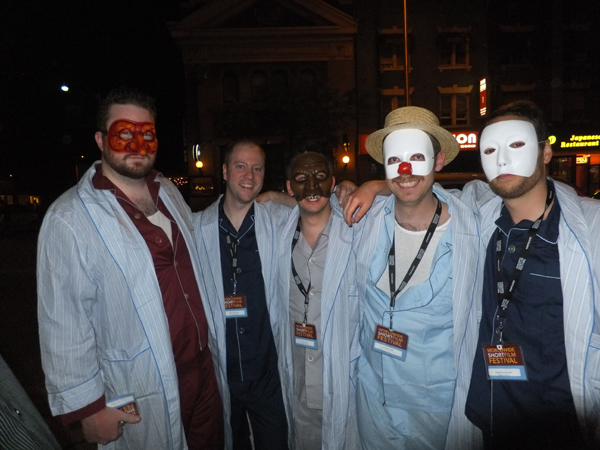 The screening took place at the Bloor Hot Docs Cinema which is a wonderfully old, newly renovated, 727-seat cinema on Bloor Street in a part of Toronto that I love. It’s never dull because there are always people walking by and lots of restaurant patios where one can sit and watch all the people walking by. As can be seen, there were a lot of filmmakers with films in the first segment of The Night Shift as Programming Manager Angie Driscoll (also in pajamas) led the Q&A. 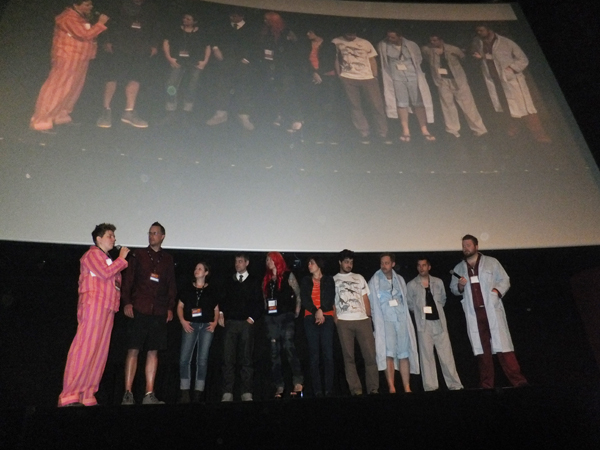 The WSFF has a fabulous Symposium. Scott and Dave were chosen to participate in theÂ Feedback Loop at 11:15 am on Wednesday in the Isabel Bader Theatre. After the audience saw most of Children of the Dark, an industry panel made up of (from left) a distributor (Brad Horvath, Head of Acquisitions, Ouat Media), a festival programmer (Jordan Crute of Short & Sweet), a broadcaster (Kathleen Meek, Manager, Original Programming, Astral Television Networks), and a publicist (Tonia Addison) gave general feedback as well as answers to specific questions posed by the filmmakers. Scott and Dave received very positive feedback and were encouraged about the potential for turning their film into a feature. 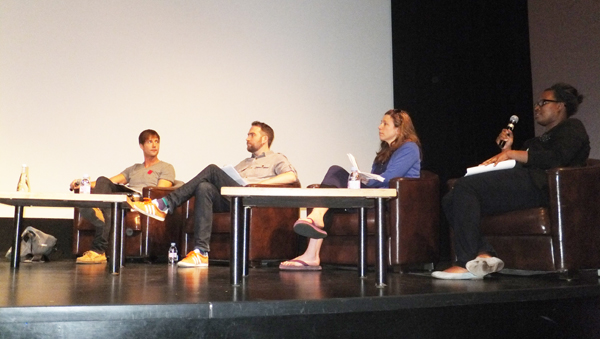 Scott addressed the audience as he responded to a question from the industry panel while producer Dave (right) and the moderator (Avi Federgreen) listened. 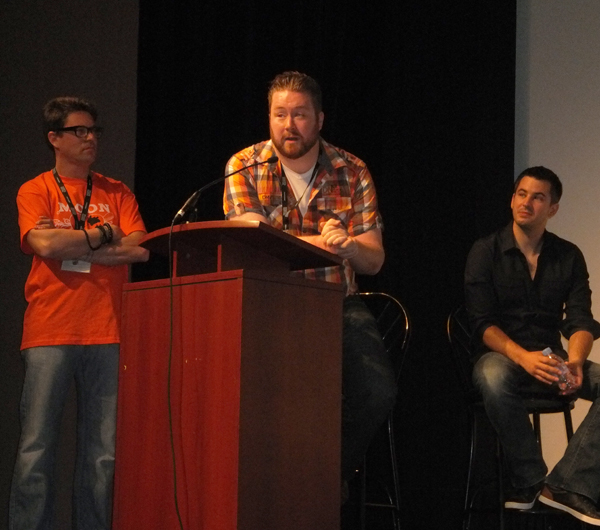 A chance to say thanks before the panel moves on to the next film. 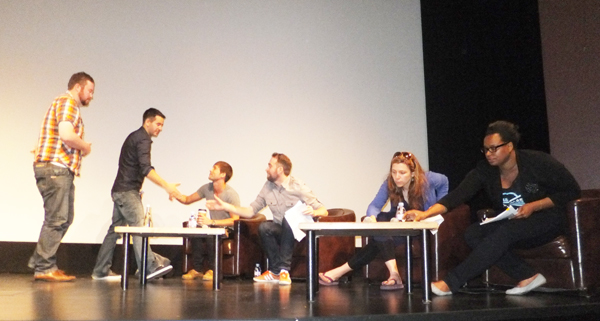 A new feature of the Symposium this year was Industry Roundtables during which filmmakers had a chance to meet and talk to buyers and distributors such as Linda Olszewski, Vice President of Global Acquisitions, Shorts International. It was a speed-dating type of opportunity that Scott, Dave, Matt and Daniel really appreciated since it opened the door for their films to potentially make some money, something that very few short films do.

Scooter and Daniel also participated on a panel called Launchpad – One Giant Step for Your Short.Â  They are shooting the feature of Chloe and Attie this fall with Scooter directing and Daniel producing.Â  As a short, it screened at the 2010 WSFF after screening at our fest. Moderator and Writer/Producer Jason Charters (left) introduces the other panelists: Daniel, Scooter, and Alan Gregg, Director, Original Content, Teletoon.

As always, the WSFF flew past in a blur. I was fighting a cold and saw fewer films than I usually do, but it was definitely more fun having the guys there. They had a blast with the parties, filmmaker reception, Happy Hours, and picnic. And I think they saw a few films as well.

Congratulations to Peace Region filmmakers with films in CIFF and EIFF!
September 18, 2013
Banff Mountain Film Festival World Tour coming to town
January 12, 2012
Go to Top
This website uses cookies to remember users and understand ways to enhance their experience.
Some cookies are essential, others help us improve your experience by providing insights into how the site is used.
Cookie settingsACCEPT ALL REJECT
Manage consent