In addition to other scenes, most of the opening sequence was shot today. A lot of the actors were involved so the old adage of “hurry up and wait” applied as they waited for the dolly shot to be set up. Tennyson Dâ€™Onofrio (Son) had a tennis ball to toss around. He participated in the Youth Filmmaking Challenge workshop the last two years, and co-starred with DOP (and workshop leader) Scooter Corkle in Private Dick which you can watch by clicking on the link.

Brandon Carpenter (Suspicious Survivor) relaxed inside while watching the crew set up the shot. 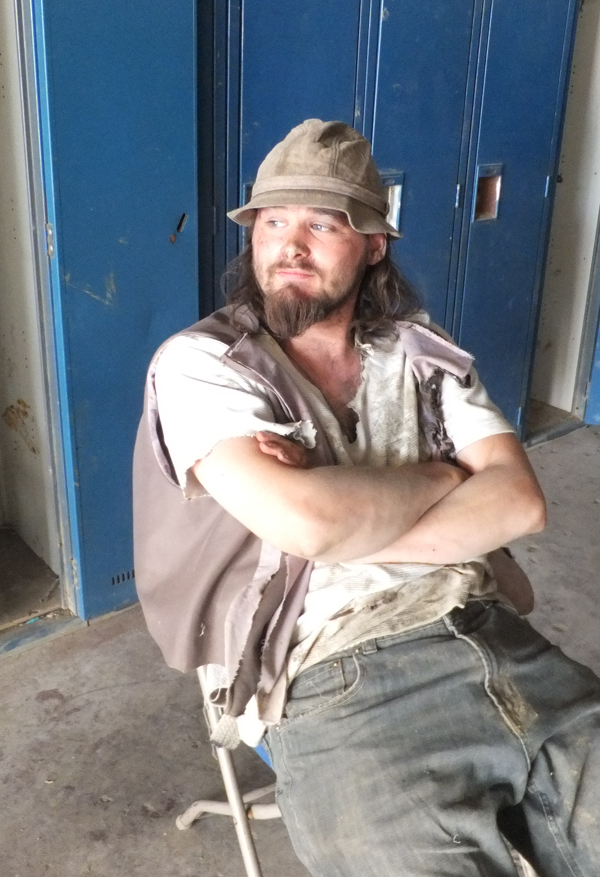 Once all the actors had their make-up done, Charity Hudak could also relax and watch the set-up for the next scene. Not only is she great at make-up and excited about the buckets of blood she’ll be making later in the shooting schedule, but she also worked for three years as an EMR. To have someone on set who can recognize and treat the first signs of heat exhaustion and assess the seriousness of any bumps and bruises is invaluable. 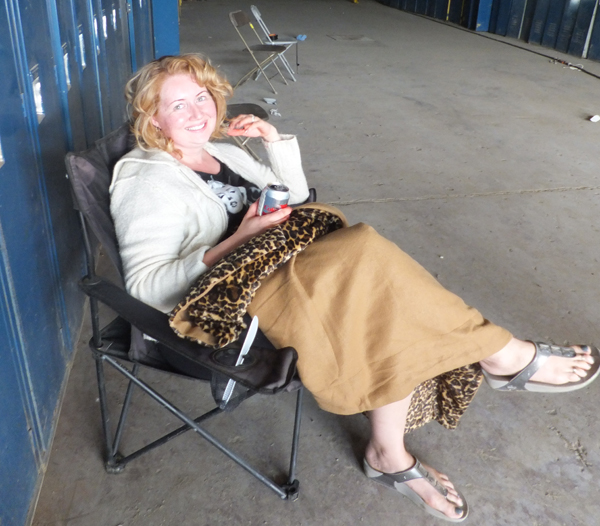 While the actors wait for blocking of the scene to begin, the crew has been hard at work. Their time to relax is during the half-hour at lunch. Interns Cameron Isherwood (left) and Eric Durnford (right) share a laugh before getting back to work. 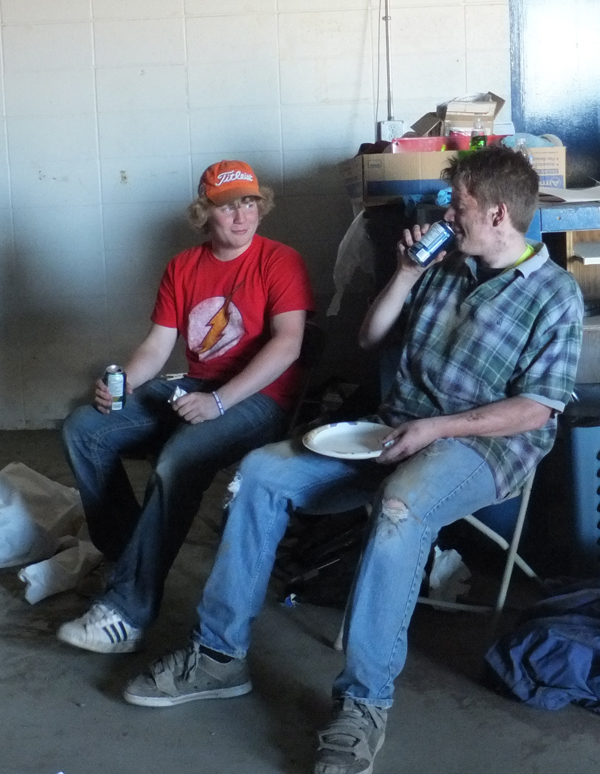 Both Cameron and Eric are veterans of the Reel Shorts Film Festival. Cameron participated in the Youth Filmmaking Challenge workshops each of the last three years, and Eric has volunteered at the fest each of the last three years. He was a front-of-house volunteer in 2010. In 2011 he joined the programming team, became the Front-of-House Supervisor, led the Volunteer Orientation training sessions, and was the Production Coordinator for one of the Youth Filmmaking Challenge workshops. This year he trained with the fest’s Technical Director Mark Shpur (who’s also an intern and actor on this film) and ran the control booth and computer for several of the film package screenings, a critically important role. I wasn’t surprised to see Eric assigned the role of Second Assistant Director, nor that he’d help out as an actor when asked if he’d be willing to do so. What did surprise me was that the role he was given is very important in the opening sequence and it’s not an easy role. He aced it though, like he does everything else.

Director Scott Belyea confers with DOP Scooter Corkle on how to block the scene while Eric watches. 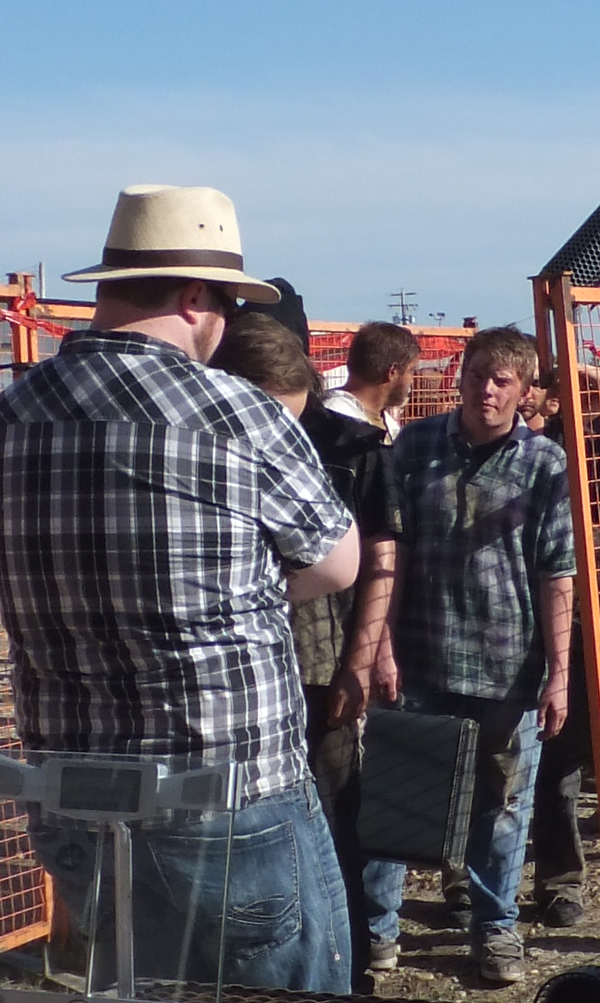 Another intern who’s been involved with the festival is Chillton Alstad who participated in the Writing Your Short Film workshop. He helps Blair with sound mixing. A surplus wheelchair was also commandeered for the task. 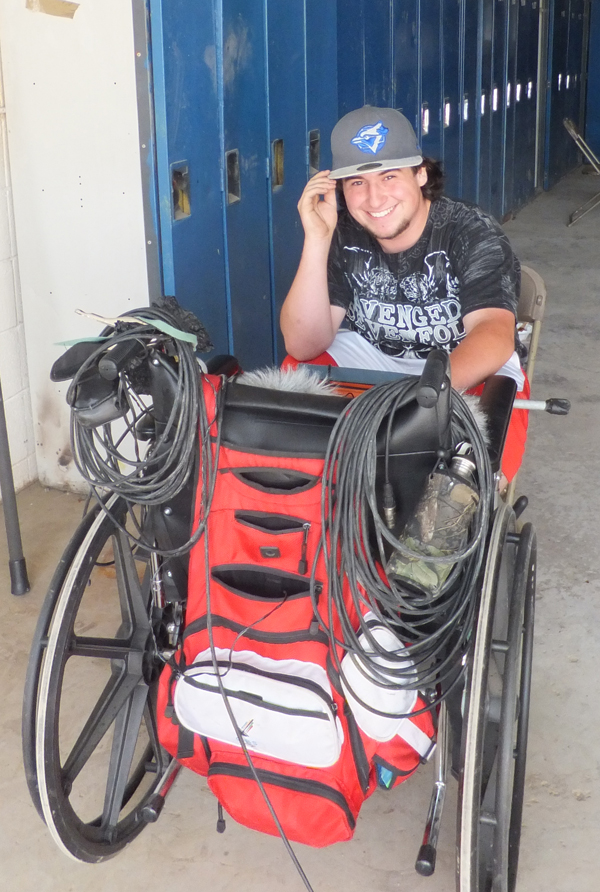 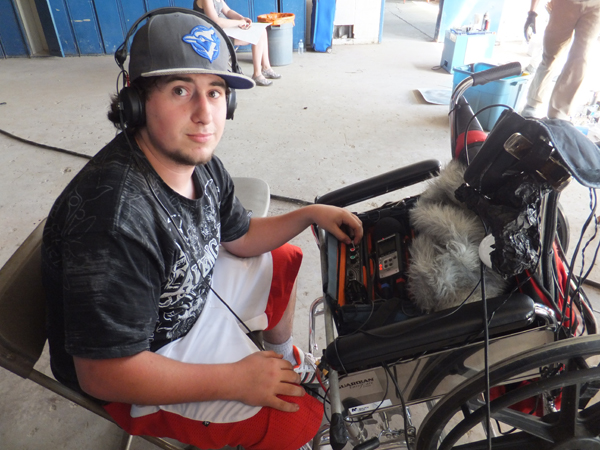 Art Director Joelle Lawton was the Production Coordinator for two of the Youth Filmmaking Challenge workshops at the last fest. Here she confers with Blair Dykes who, as Assistant Director, often hops on his bike to quickly get around our depot location. It’s very difficult to get a photo of him between shots because he’s constantly in motion. 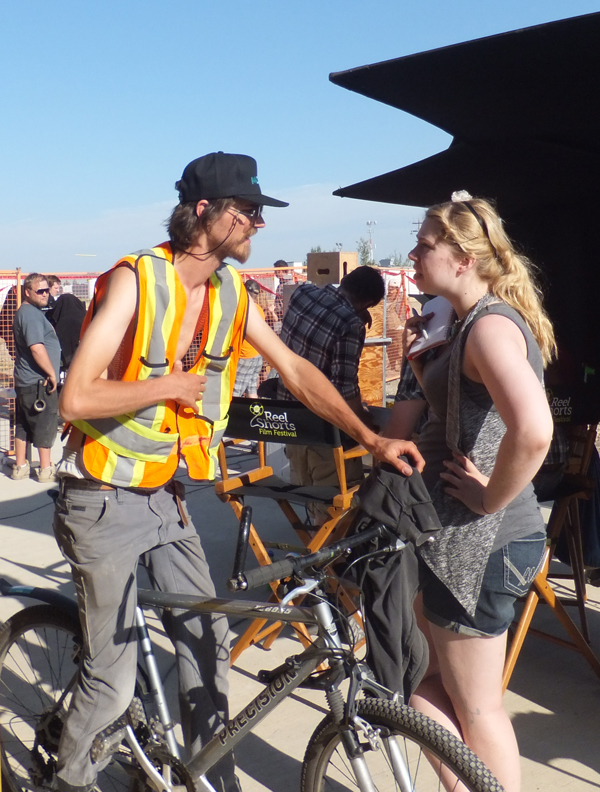 Camera Operator Ryan Skeete (left) and 1st Assistant Cameraman Chris Beauchamp (right) get the camera set up for the opening dolly shot. Chris has been on the festival team for the last two years and in 2011 his business Beauchamp Creative did a complete rebranding of the fest including logo, website, and print program. He’s an accomplished photographer so it’s no surprise to see him working so closely with Ryan on this project. 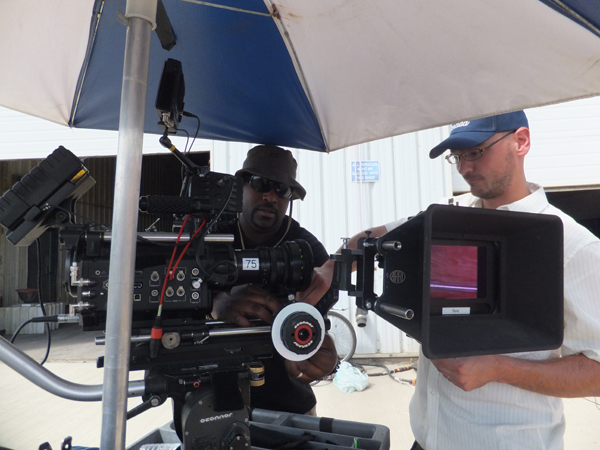 Once everything is set up, it’s finally time to start Take 1. Intern Cam Belseth is the Dolly Grip pulling the dolly along the track. Intern Forester McKim assists while intern Rory Mells pauses to watch the action. 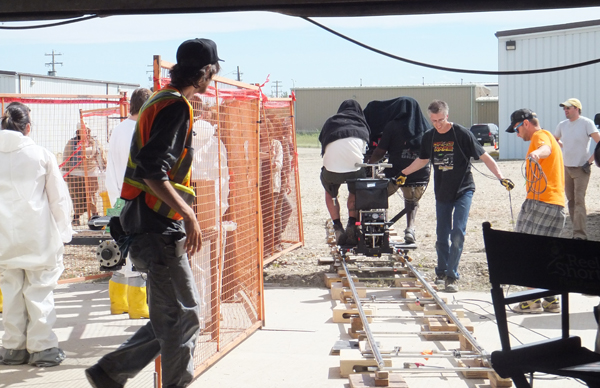 Scott talks to the actors before calling action for Take 2. 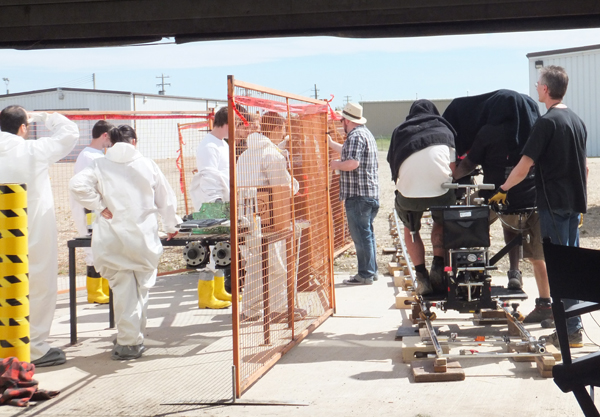 When the dolly shot worked out exactly the way Scott and Scooter had planned it, Scott called the actors to gather around the monitor so they could watch it. There was a big cheer when it ended. It looks really great!

Script Supervisor Mary Jo Van Order checks her notes while Scott and Scooter plan the blocking for the second dolly shot. Mary Jo is another intern who volunteered with the festival. She was the Production Coordinator for one of the Youth Filmmaking Challenge workshops as well as for both screenwriting workshops. 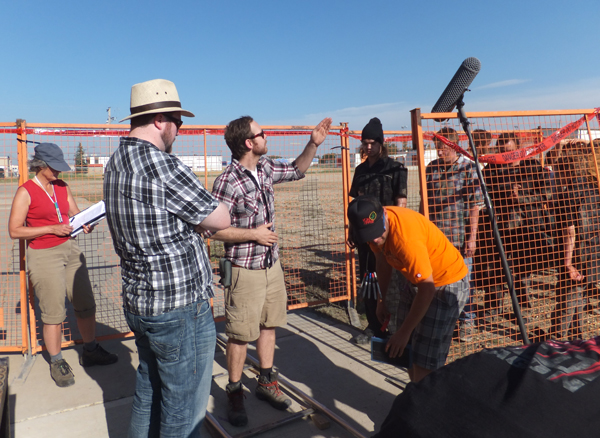 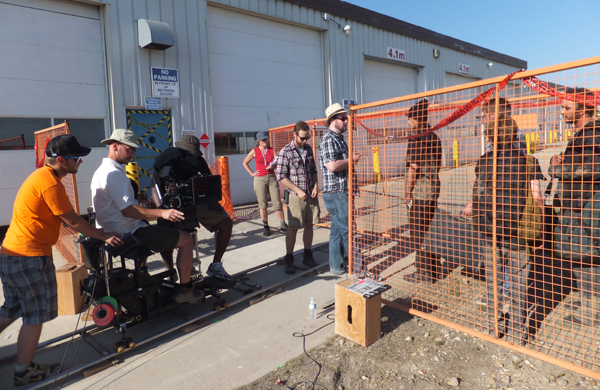 There was not a lot of acting going on by this point when it came to the performers acting hot and tired. We had lots of water on hand but it was a long afternoon for them. Actors amaze me! 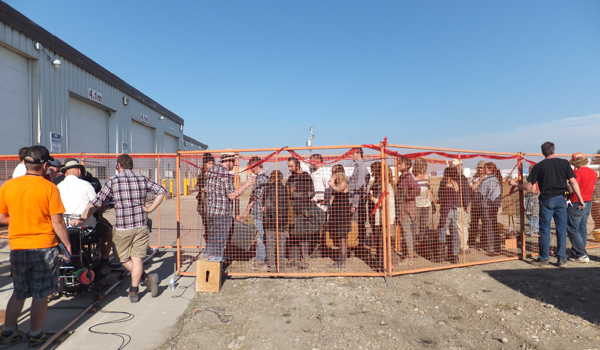 We were finally able to go inside to do more interior scenes. Shooting Day 2 was another 13-hour day.