You are here:
Shoot for Reel 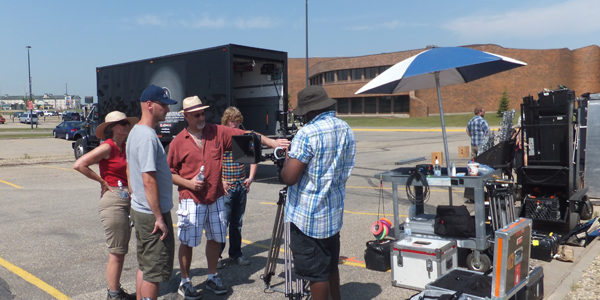 Shoot for Reel is a 2-week filmmaking internship training program that we’re offering July 9-20 in collaboration with Grande Prairie Regional College. Ten interns will assist in the shooting and editing of a short film under the direction of award-winning Vancouver filmmaker Scott Belyea who grew up in Grande Prairie. The interns will learn how to use the RED EPIC camera from FAVA in Edmonton and a package of gear including lights from William F. White International in Calgary. The film about a routine tour on a charter bus which turns into a nightmare when a deadly biological outbreak forces the passengers into quarantine will screen at the 2013 Reel Shorts Film Festival May 1-5.

Over the last four years, the festival has produced 11 student films during the Youth Filmmaking Challenge workshops led by Scott, Scooter Corkle, and Michael Bourree. Scooter and Michael will also work on Shoot for Reel as Director of Photography and Sound Designer respectively. Shoot for Reel is the next step in the festival’s goal of helping to develop a filmmaking community in the Peace Region.

With the experience that Scott, Scooter, and Michael have in the film industry and their track record as mentors, the film has a good chance of doing well on the festival circuit and interns will receive much of the training they could expect to receive at film school. The interns will also enjoy another benefit of film school – they will form a network of potential collaborators among themselves that they can turn to when making their own films in the future.

There is no fee for the program as these are volunteer positions available to Peace Region residents. Applicants must be at least 16 years old. Information on how to apply can be found here.