You are here:
Embedded videos 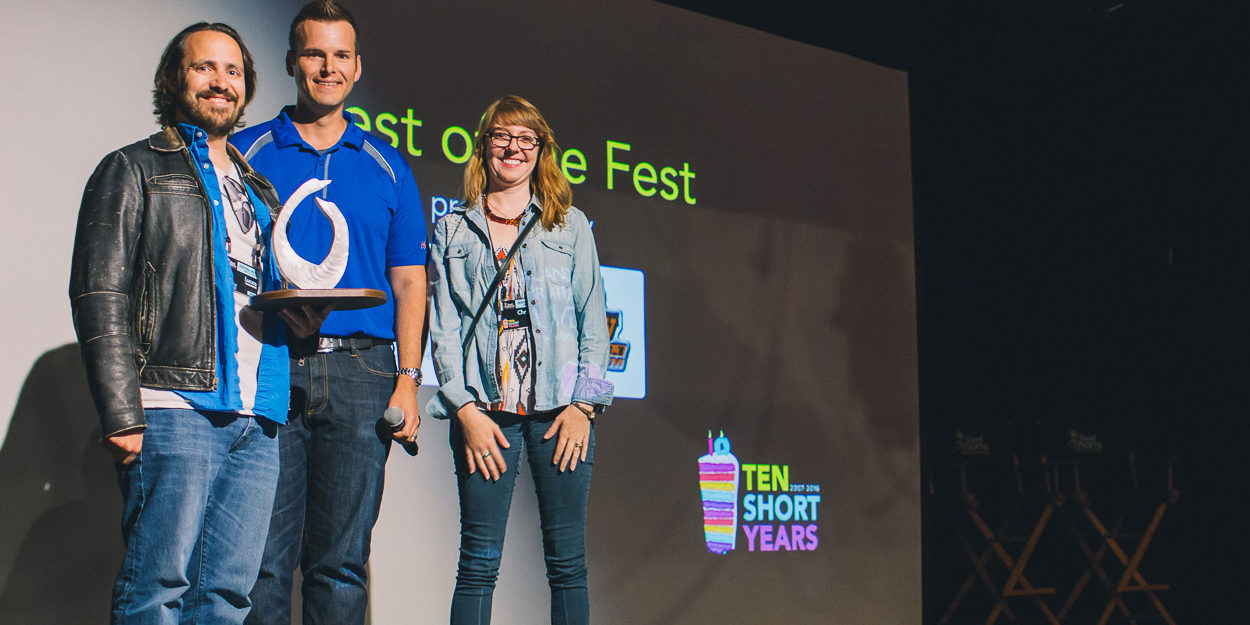 Enjoy several award-winning films from past Reel Shorts Film Festivals that are available to watch online! They were selected for the Audience Choice Award, Youth Audience Choice Award, or the juried awards for best animated, documentary, and live action shorts. There’s also a fest-produced youth film that won awards at two other festivals!

Shown in the photo are Chris Wall of Hansen Ford who’s presenting Lucas Martell (left) and Christina Martell with the 2016 Best Animated Short Award for The OceanMaker which they produced, and Lucas wrote and directed. For a list of all the winning films, see About Reel Shorts.

Produced by the Fest

HB (5+), directed by Nathan Fast in 2013 as part of the Youth Film Mentorship Project, won the Best Overall Youth Short Film at the 2013 Calgary International Film Festival and the Young Filmmakers Program Competition Grand Prize at the Austin Film Festival in 2013.

Awarded at the Fest

The Blue Door (10+ Frightening Scenes), a 9-minute film from the UK directed by Paul Taylor that screened in the Psycho Shorts package – won the Audience Choice Award and Best Live Action Under 15 Minutes

Dji. Death Sails (5+), a 5-minute film from the Republic of Moldova directed by Dmitri Voloshin that screened in the A Small World (Gr 4-6) package – won the Youth Audience Choice Award

The OceanMaker (10+ Violence), a 10-minute film from Belize and the United States written, produced, and directed by Lucas Martell that screened in the Big Dreams (Gr 6-9) package – won Best Animated Short

The House is Innocent (10+ Mature Subject Matter), a 12-minute film from the United States produced and directed by Nicholas Coles that screened in the Criminal Minds package – won Best Documentary Short

The Gunfighter (14+ Crude Coarse Language, Violence), a 9-minute film from the US directed by Eric Kissack that screened in the Time Warp package – won the Audience Choice Award – MATURE

Fool’s Day (10+ Coarse Language, Gory Scenes), a 19-minute film from the US directed by Cody Blue Snider that screened in the Mark the Day (Gr 10-12 English/Languages) package – won the Audience Choice Award

Grandpa and Me and a Helicopter to Heaven (Morfar och Jag och Helikoptern till Himlen) (10+ Mature Subject Matter), a 15-minute film from Sweden directed by Johan Palmgren and Åsa Blanck that screened in the Families Like Mine package – won Best Documentary Short

A Senior Moment (10+), a 6-minute film from the US directed by Michelle Davidson that screened in the Bless the Beasts… (Gr 7-9) package – won the Audience Choice Award

Congratulations to Peace Region filmmakers with films in CIFF and EIFF!
September 18, 2013
Go to Top
This website uses cookies to remember users and understand ways to enhance their experience.
Some cookies are essential, others help us improve your experience by providing insights into how the site is used.
Cookie settingsACCEPT ALL REJECT
Manage consent