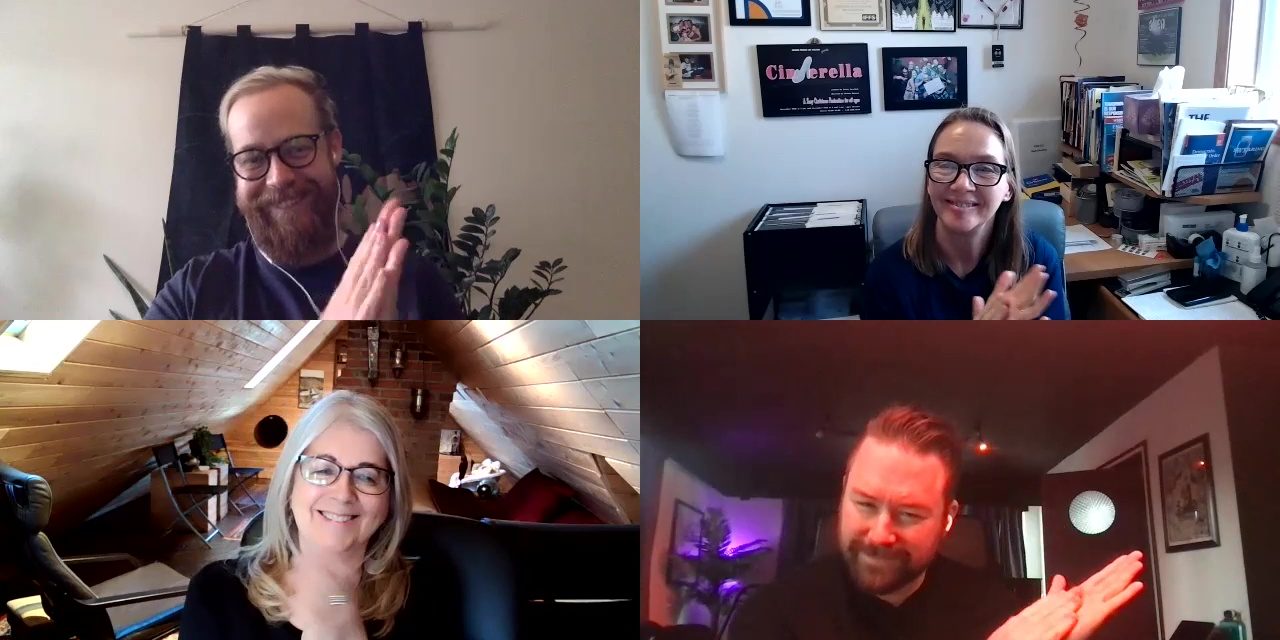 Jury members Scooter Corkle (top left), Bonnie Thompson (lower left), and Scott Belyea (lower right) are joined by Festival Director Terry Scerbak (top right) as they announce the award winners for 2021. Scroll down to watch 3 of the films as well as the 9-minute announcement video.

Read the web version of the program here.

Open a printable version of the program here.

Homesick is a 27-minute film from France written and directed by Koya Kamura.

Jury: Both personal and profound, it is a complete cinematic experience that finds humanity in the aftermath of disaster.

Stephanie is a 15-minute film from Belgium written and directed by Leonardo van Dijl.

Jury: A powerful, intimate story with a delicate touch grounded by the nuanced performance of its young lead.

The Present is a 24-minute film from Palestine directed by Farah Nabulsi.

The Devil’s Harmony is a 14-minute film from the UK directed by Dylan Holmes Williams.

Jury: A singular vision like nothing we’ve seen before that weaves genres with confident precision of craft.

W is a 6-minute film from Greece written, produced, and directed by Stelios Koupetoris.

The Beauty is a 4-minute film from Germany directed by Pascal Schelbli – scroll down to watch it.

Jury: A surprising and poignant, allegorical comment on the state of the ocean and our relationship to it.

Honorable Mention – Grandad Was a Romantic

Grandad Was a Romantic is a 5-minute film from the UK written, produced, and directed by Maryam Mohajer – scroll down to watch it.

The Deepest Hole is a 12-minute film from the United States produced and directed by Matt McCormick.

Jury: Subversive, satirical, unique, hypnotic, a different take on world history showing how the world’s deepest hole can reveal the hypocrisy of the bigger political picture.

Zone Rouge is a 15-minute film from Canada co-written and directed by Dominique van Olm – scroll down to watch it.

With the Land is a 14-minute film from Alberta directed by Dominique Keller – $300 cash award presented by PRIMAA (Peace Region Independent Media Arts Association) – scroll down to watch it.

Jury: A visually compelling story and a strong character portrait that transported us into a world of someone living an alternative existence.

Zombies and Indians is a 12-minute film from Alberta written, produced, and directed by Keith Lawrence.

Grandad Was a Romantic

Thanks to Monty Simo for putting together this year’s fest trailer – a sample of some of the 73 short films in this year’s program.